I am spending way more time in the drug store than I am on the ski hills these days. Having said that, the winter solstice was managed in the ‘Land of Our People’ so I got just one day on the slopes with my daughter during a visit home in February. It was liberating although I almost needed assistance boarding the aircraft the next day. But enough about that – any more talk about skiing and I’ll start sounding like Bobby Lefsetz. Not that there’s anything wrong with that.

Let’s double back to the local apothecary and my somewhat consistent step count on the aisles with regard to sleep assistance, back pain, distilled water for the CPAP and various statins at the prescription counter. However, scouring the shelves as I might, I don’t see any over the counter meds to help with the condition of right-on-time onset ‘osteo-crotchetiness’.

The symptoms are numerous – I’m impatient in traffic, I barely contain my rage in the lineup at Starbucks behind some halfwit who only looks at the cooler and baked goods display after he or she gets to the counter. Cold calls from emerging economies wondering how I am doing with my duct cleaning are catharses – “ I live in a fucking apartment you idiot.” Or something like that.

Generally speaking I’m fed up with everything including those darn kids playing in my Jello tree.

We know where this comes from, this persistent brittle-boned railing against the current living conditions, the hardening against just about everything that has arrived since color TV. In the words of one of my more fave rabbis, “When I was young I was angry with the world, as I got older I was angry with my city, and now, I’m just angry with myself.” Yes, the fault lies not with the stars, and perhaps my outlook would be a little bit sunnier on a 150-foot custom mega-yacht with a helipad and Steve Aoki as a live-in deejay providing the soundtrack. But then again, I recall a photo of one Johnny Carson, in his dotage, slumped over the railing of his own yacht. Looked a little crotchety from here.

Is crotchety the same as being grumpy or curmudgeonly or crabby? Am I grumpy? Grumpy permanently gums up the circulation with a high “old and white’ plaque count. Not quite as pronounced as in Disney’s dwarf (can you even say that anymore?). In fact if you had to pick your default character amongst Snow White’s entourage it sure as hell wouldn’t be Bashful or Sleepy or Dopey. Being Doc (Sounds like an HBO doc?) requires an education. No, at this age, we’re all Grumpy. The film Grumpy Old Men (we didn’t need a sequel) starring Walter Matthau and Jack Lemmon is grumpy Talmud.

Curmudgeonly, by comparison, is Dickensian in terms of intellectual hue and speaks to a staunch lack of forthcomingness, if that is a word. A lot of imperious glowering through a monocle. Curmudgeons don’t give it up willingly. Brits are curmudgeonly. I was watching a podcast with Dave Rubin and the legendary playwright David Mamet in which Mamet confessed that former New York Times columnist Bari Weiss told him to, “not be a curmudgeon”. The great writer caused a stir recently when he said that teachers, male teachers, are generally inclined toward pedophilia. See, that wasn’t curmudgeonly. It’s one crotchety opinion, though..

Cantankerous, to further the study, is a slow moving whale shark with no real bite. Don’t push them and you’ll be fine. Wilf Brimley was cantankerous.

Crotchety, by comparison, is unsolicited. Crotchety speaks when it is not spoken to. Crotchety clears the room on ‘Open Mic Night’. Crotchety is not filter tipped. Crotchety can sting. Crotchety is defiantly unwoke. Or woke in 1983 terms. Crotchety hates remakes. Crotchety yells at the TV. Crotchety can ruin elevator rides with one baleful up and down scan. Crotchety doesn’t do well at the dry cleaners or the mechanic’s or on all-inclusive vacations. Or with QR coded menus. Crotchety sits at the head of the table and interferes with conversations.

Yes, I imagine you can be a person of color and crotchety. But we invented it. How about women? No. I’m all about gender equality but crotchety is exclusive to the male genes. Women can be persnickety but don’t go much past crabby, which is kind of a benign extension of ‘Mary Mary, quite contrary”. Normally, in a marriage, the better half plays the good cop, “Leave the poor woman alone dear, she’s just doing her job.”

Is there a crotchety Hall Of Fame? Well, no. There is an unwritten law that anybody born in the 19th Century had a pretty good right to complain through their lives in the century that followed. Especially if you survived the trenches of WWI. I would say that Teddy Roosevelt was probably crotchety. His cousin Franklin was not. Fred Astaire? Not so much. Paul Newman? Uh, no. Steve McQueen? The quiet crotchety type. Babe Ruth? Never. Tyrus Cobb? Oh yes. Bill Clinton? Wrong guy to use the word ‘crotchety’ around.

Any guy over 50 behind the counter at a local variety store is crotchety. Bartenders the same age? No. Cab drivers? Yes. Uber drivers? No. Dentists? No. Male nurses? Yeah. John Diefenbaker? Would be disappointed if he wasn’t. Joe Biden? Too out of it. Donald Trump? No, not ever.

Bill Frawley, born in the 19th century, invented crotchety on TV as the Ricardos forever grousing landlord Fred Mertz. Apparently he was worse in real life although JK Simmons’ portrayal of Frawley in the otherwise execrable Being The Ricardos is textbook crotchety. Actually pretty much everything Simmons does is soaked in crotchets. Let’s toss in Frawley’s successor on My Three Sons, WillIam Demarest, on the all-time greats list. Always pissed about something that Uncle Charlie. I will also add the great comedian Lewis Black who pretty much foams at the mouth with crotchety vitriol during his act.

So is there a cure for crotchety? Perhaps a few hours with the Calm app would help. We could also remember that we made the bed we are sleeping in. Maybe, cut back on the steady diet of Tucker Carlson and Hannity. Try not to stew. Volunteer a little. I’m doing some and it feels great. Clean up after yourself. Call an old friend out of the blue. Leave the nitpicking to the nitpickers. And perhaps be thankful that you are around to be crotchety when so many others of our generation are not.

However, if we can overcome our crotchetiness, it doesn’t mean we can’t appreciate it when expressed as well as Larry David, the co-creator of Seinfeld and the zeitgeist behind and in front of Curb Your Enthusiasm. If David’s own gestalt was defined by George Costanza, the character was just too young and nebbishe back then to be crotchety. But David himself was leaning into his golden crotchety period when he started Curb and now, in his mid-70s, is in his prime. Nothing is ever right on Curb and in the world he lives in, celebrity basted or not. He’s never wrong and never falls on his sword until it falls on him..

Finally, in a show of pure crotchety power, David had his own autobiographical documentary on HBO canceled hours prior to airing. Not sure why. But he was upset with something. Or everything. Attaboy.

Read More
This installment was on permanent hold until I ran across a recentish commercial for Match.com. In earlier installments, the courtesy reads from friends all came back with comments about the tone and somewhat caustic edge. Writing can be, as I have said, cathartic.
Read More
6
0
0

Read More
I have been eulogizing my own ‘In Memoriam’ entry every year for the past few, tallying up the physical losses that come with time. I knew that if I kept up the blog I would have to eventually write something about my father, Jules Pinkus Gross, and the time is now because he passed away on Canada Day this past year. It happened early in the morning and he was by himself which is sadder than sad but he went quietly at the wonderful age of 98 years young.
Read More
0
0
0 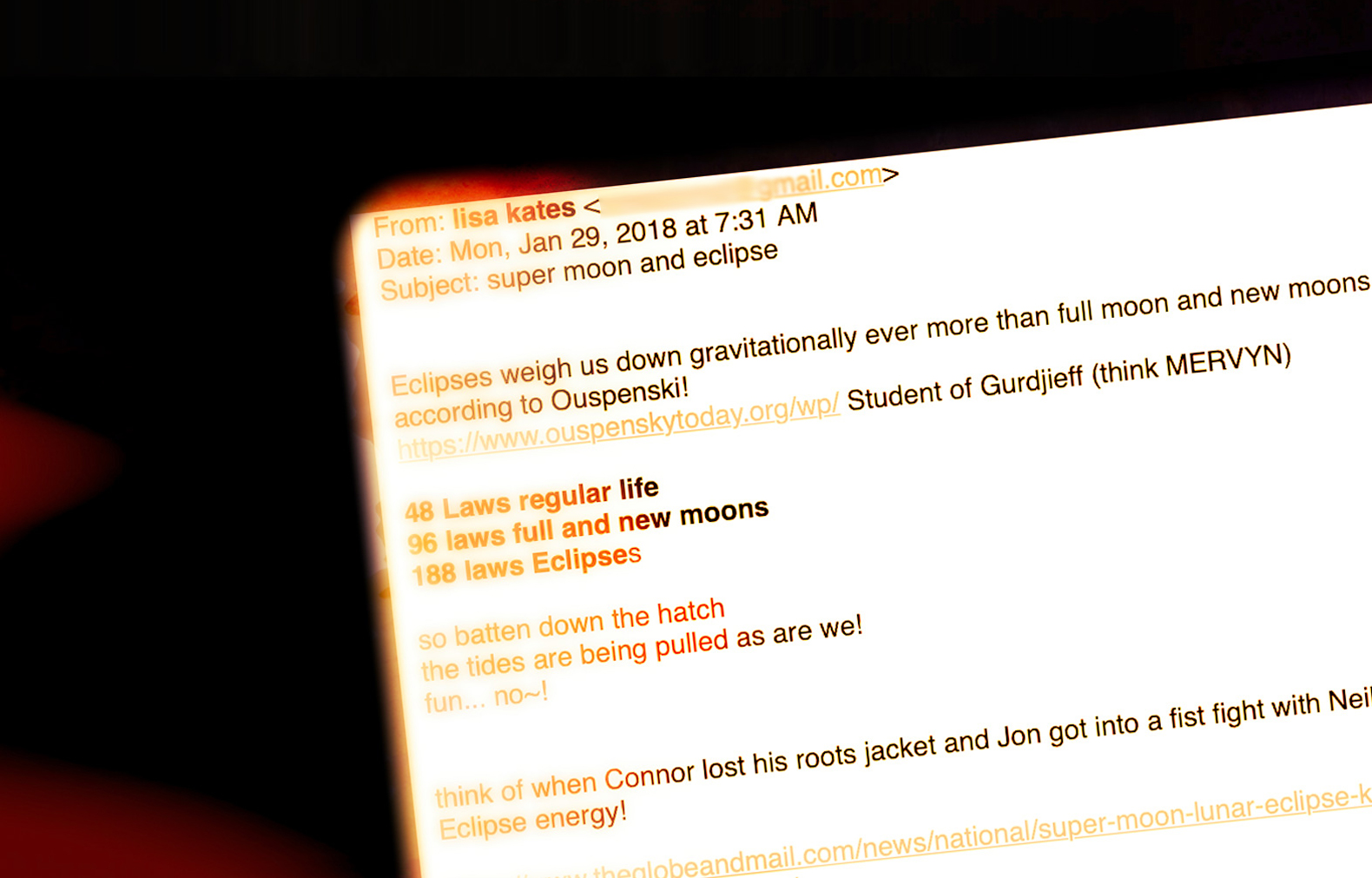 Read More
I had kind of prepared this piece earlier this year as a take on spring cleaning but that season kind of came and went. I worked up something about the parallels to Passover and the ritual cleaning of a Jewish home prior to the holiday. I brought in for flavor the Iranian Nowruz, or new year, which is said to include traditional ‘shaking’ of the house.
Read More
1
0
0